Saturday sees the Winter Solstice - the shortest day of the year. And yet sunset is already, just, starting to creep back, getting a minute or too later each day even before the Solstice. Even if we can't or don't notice this, it does in some ways reflect the contradictions of these last few days before Christmas.

A majority are still rushing about, without time to do what they think they have to do.  And then there are the others who did it all ages ago and are now having to pretend to be part of it all.  Expectation is, however almost universal. And yet in little more than a week's time the world will move on and that feeling will have gone. It's all over very quickly, the way we do it now.

Nature - rather like Norfolk - does it differently. We may have passed the shortest day, but winter is only just starting. Storm and tempest seem to have been in ample supply in the last few weeks, but paradoxically there has not been a lot of rain and very little cold. Just like last year in fact, and the year before.  The rain and the snow and the cold will come, and maybe if it is like last year it may stay with us rather longer than we might wish.  But the fact it is naturally out of our control is good, so different to our modern Christmas with its artificial and manufactured rush.
Posted by Burnham Grapevine at 19:50 No comments:

Just a week ago the Norfolk coast looked much as it had done for as long as many can remember. The storm surge on Thursday night has changed things. Not just in the physical and emotional damage wrought in the communities along the coast but also in the way we think and feel about the place.

Given the ease of recording and publishing images and thoughts there has inevitably been much posted about what happened and what it looks like. Two in particular caught my attention; firstly Paul Macro, a Norfolk photographer who posted a collection of images of the aftermath which sums up the wider impact of the event and another by friend - and also a photographer  - Janice Alamanou, who wrote about it from her home in Wells-next-the-Sea.

Closer to home, Burnham Overy was badly hit with homes and businesses being wrecked. The bank between Overy and Wells held but the stretch between Overy and Deepdale was breached in a number of places. Friends in Burnham Norton now find they have seaviews rather than the freshwater marsh they have been accustomed to, a pattern repeated along the coast particularly between Morston and Salthouse.

Much of what has been lost or damaged will in due course be dealt with. As Janice noted, they are a hardy bunch along the Norfolk coast and its amazing to see how much has already been achieved. Some locations seem strange and altered but will soon be as familiar as before. Last evening on the bank at Overy it was actually quite difficult to believe what happened. The path has a new soft topping - it's just like walking on a bed of pine needles - of material swept in off the marsh, the birds are there in numbers and the sky remains. 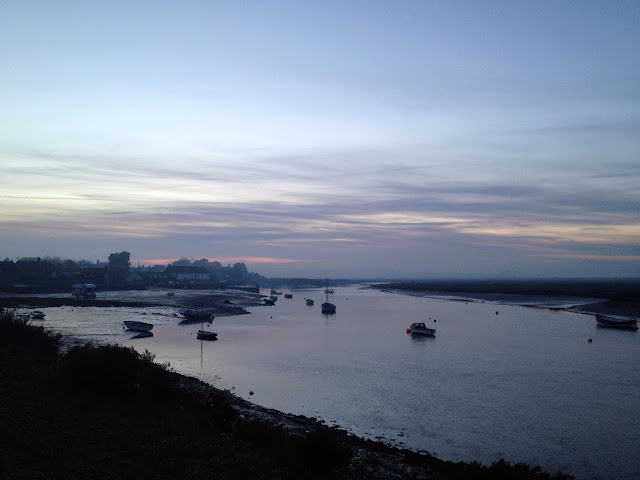 And then you come across strange things in the wrong place. Bits of boardwalk from Brancaster and beyond. One of the footbridges from the marsh, high and dry at the top of the bank. It's difficult to yet see how the creek and the marsh have changed but this will become clearer as time passes.

Peter Beck, long time resident of Overy and a man who probably knows as much about the place as any remarked some six months ago, that a big event - storm or flood - was well overdue and that all the groynes and banks in the world can be swept away on just one tide. Along this coast the sea has always won and that has not changed - nor likely to.
Posted by Burnham Grapevine at 12:38 No comments: