In our rural community there is no getting away from the fact that an early dusk brings an early end to the working or trading day. Already in the first week of the new (or old) time - even though it is still October - the village goes quiet around sunset and its hard to believe that much is happening or likely to happen between 4.30 and 5. Given that the economy is so dependent on tourism this can hardly be viewed with enthusiasm by anyone. 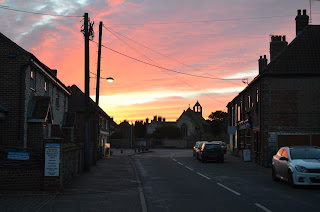 Clearly this impact is not felt in urban areas, or is it? With an ever-ageing population there surely will be significant numbers who prefer to be home before dark given the choice. Equally there is growing evidence to support a move to delay the academic day, reflecting greater knowledge about how the younger brain operates. So why do we continue to respond to the now questionable needs of a minority hundreds of miles to the north in preference to the needs and preferences of the wider community and economy where we live?

Self-evidently the lighter mornings are a pleasure but there are clearly few up and about to enjoy them, and other than the Scottish dairy industry, I am unaware of other economic benefits. All in all, I am not convinced our annual reversion to GMT serves any real purpose.
Posted by Burnham Grapevine at 12:21 No comments:

On a lighter note

Since early June, Houghton Hall has been staging programmed illuminations of the West Front running from sunset to darkness every weekend, part of LightScape - an exhibition of light installations by James Turrell.

As ever, the closer and more convenient these things are, the less effort is made to visit. So it's no surprise that it was only on the final weekend, in fact the penultimate show, I travelled the 11 miles to witness it. Standing in the somewhat chilly - if very still - gathering gloom of a late October friday, a hundred yards west of one of England's finest houses waiting for the lights to come on felt a peculiarly English thing to be doing. And of course I was not alone - a rough guess would be that there were some 80 or 90 others dispersed across the grass. Some sitting, some standing and some - I assume - somewhat damply lying down. Perhaps the most remarkable thing about the whole affair was how quiet it was, a view shared by the man standing alongside.

As is often the case with these things, the experience was about to become more memorable in a wonderfully English way. The lights did indeed come on and as my friend noted the hush became even deeper. 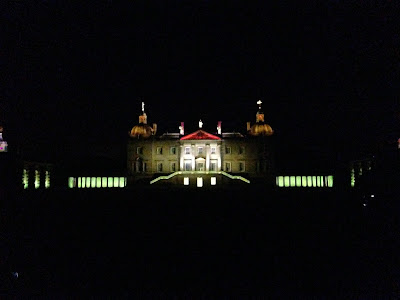 There were however, and quite naturally, a number of quiet conversations taking place including in the reserved deckchairs some 20 yards away; this was, I gathered, his Lordship with guests including patrons and supporters of the installation. My companion was then joined by a friend and naturally a further subdued conversation ensued.  It was, thus something of a surprise for us to be told off in a very English female voice from somewhere behind us - "would you mind being quiet. Some of us are trying to enjoy the performance."

With I thought admirable restraint, there was no riposte; we simply did as we had been told, greatly enjoying the illuminations, albeit with suppressed mirth and of course more aware of the conversations continuing in front of us. I can only assume my companions were, like me, contemplating the delicious possibility of the people who had made the whole thing possible being similarly reprimanded.

Sadly this was not to be, but I cannot imagine such an installation being viewed anywhere in the world in more reverential circumstances. There was no music or words to be outrageously interrupted. It was simply light - and it was beautiful.
Posted by Burnham Grapevine at 16:35 No comments:

On each occasion we have seen not only previous purchasers returning but always the unprompted wonder and delight from those unfamiliar with his work that has been evident since that first exhibition.  This was particularly so in Exeter where our most successful show was achieved far from familiar territory, 300 miles away from our home patch.  However at the end of a successful exhibition the question inevitably arises, 'What next?'

The initial temptation was to return to London with all the metro-benefits (and costs) that this would bring. However, after York and Exeter, it is clear that showing these atmospheric paintings in the places which are their inspiration is most appreciated. In the light of this we opened negotiations with one of Gerard's favourite Cathedrals - and one of the finest - and are delighted to now be able to confirm that on September 23rd next year our next exhibition of his paintings will open in the Lady Chapel of Ely Cathedral. 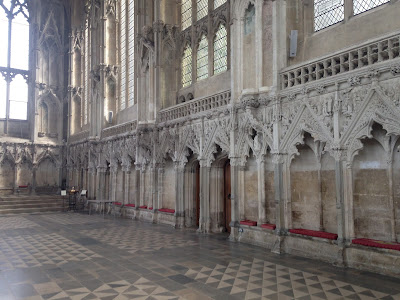 At the point this was agreed, it all seemed quite a long time off and yet now, just a few months later, it seems to be coming closer with astonishing speed. The level of interest - even at this stage - is remarkable and through glimpses of the first few paintings we and our hosts are already starting to feel that frissance of wonder and delight at what is to come.
Posted by Burnham Grapevine at 12:59 No comments: