Having spent the last few weeks on ice, you almost miss it now its gone. Particularly as the crispness (!) of mid-December has been replaced by all encompassing mist. 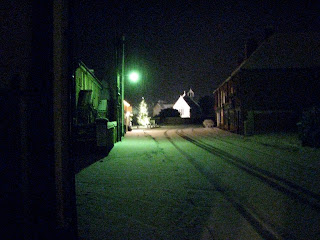 Despite the cold, life in Burnham has continued pretty much as usual; on a parochial note the gallery has actually seen an increase in visitors over December last year.  It obviously takes more than a bit of snow and -10˚ here in the garden to put people off!
Having finally got to Christmas, it did briefly appear that the traditional family Christmas at Gunton might elude us, being - fortunately only temporarily - defeated by glazed ice on the final approach. Judicious lightening of our respective loads and a slight change in the atmosphere produced a happy ending.

Correspondence with artists around the country suggests we have been lucky but there is still January and that month that follows.  Maybe the 4x4 will still be needed!

The last few days have seen visits by a number of our regulars - customers and artists - and as usual new work has appeared. Some of it has sold already, which provides yet further proof that if you like it, don't delay.

2010 was not without incident - but has generally been good to us. Long may it continue.... Happy New Year!
Posted by Burnham Grapevine at 16:37 No comments: