Grapevine in Exeter - 9 days in the Chapter House

Just over twelve months ago I mentioned a visit to Exeter as part of an autumn escape from Norfolk. At the time I noted that this was to be the venue for our next exhibition of Gerard Stamp's work. Accordingly at the start of the month, with paintings already despatched and display systems ordered, Grapevine headed west.

As regular visitors to the gallery will know from my conversations, this venture was not without its hazards, taking us and the artist into largely unknown territory. It's one thing to arrange and run an exhibition in your own space, it is rather different doing it in a Cathedral, whose main business is clearly not the same as ours - and doing it for an unknown and unquantifiable audience. 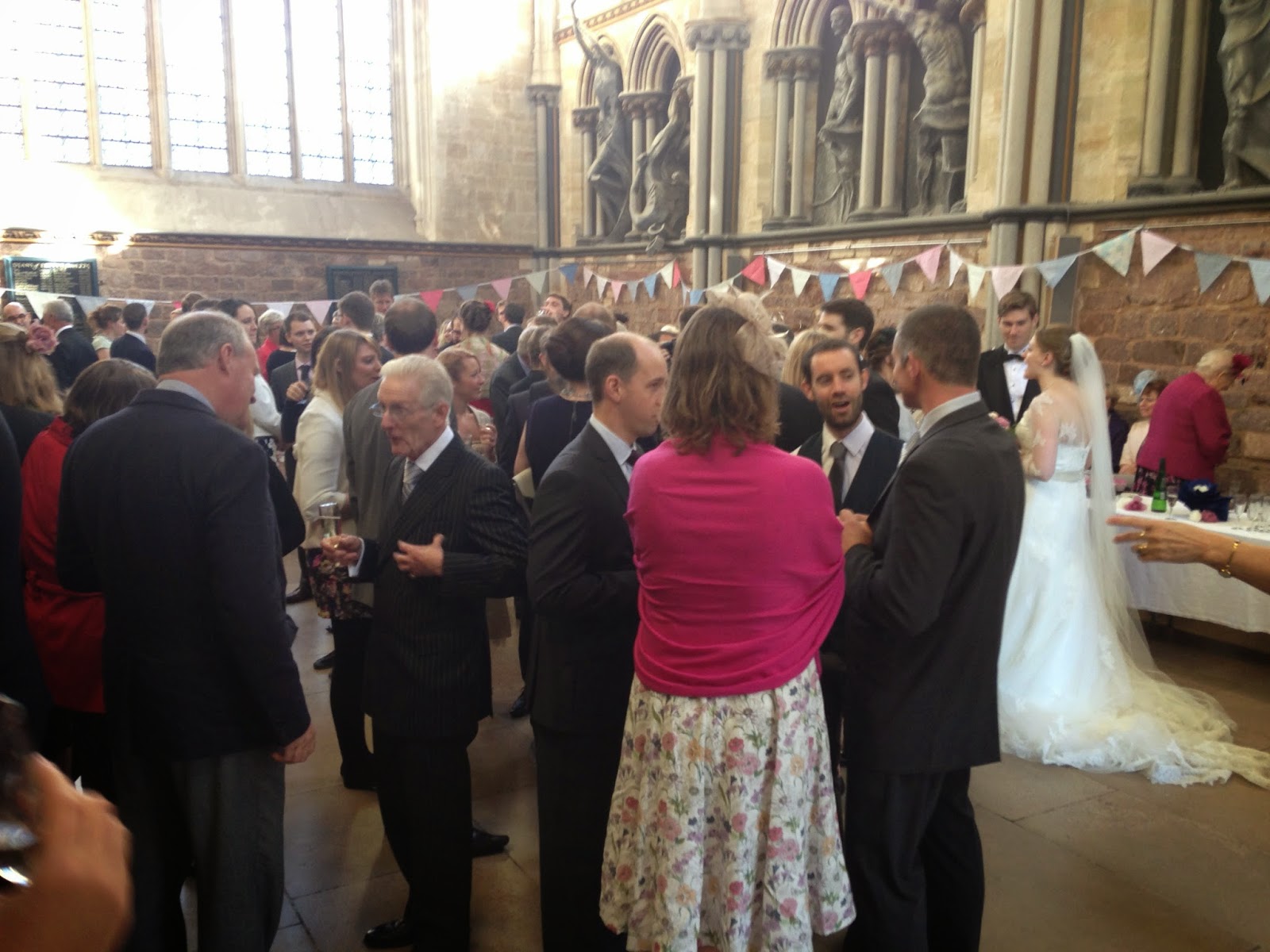 Despite a degree of stage fright on my part, and with the willing assistance of Cathedral staff and volunteers, the doubts and concerns proved to be without foundation.  Having seen the Chapter House - the venue for the exhibition - fully occupied by wedding guests on the preceding weekend, latent doubts started to simmer nicely, particularly with regard to whether the space was actually as big as I had thought, and whether the agreed layout would fit. 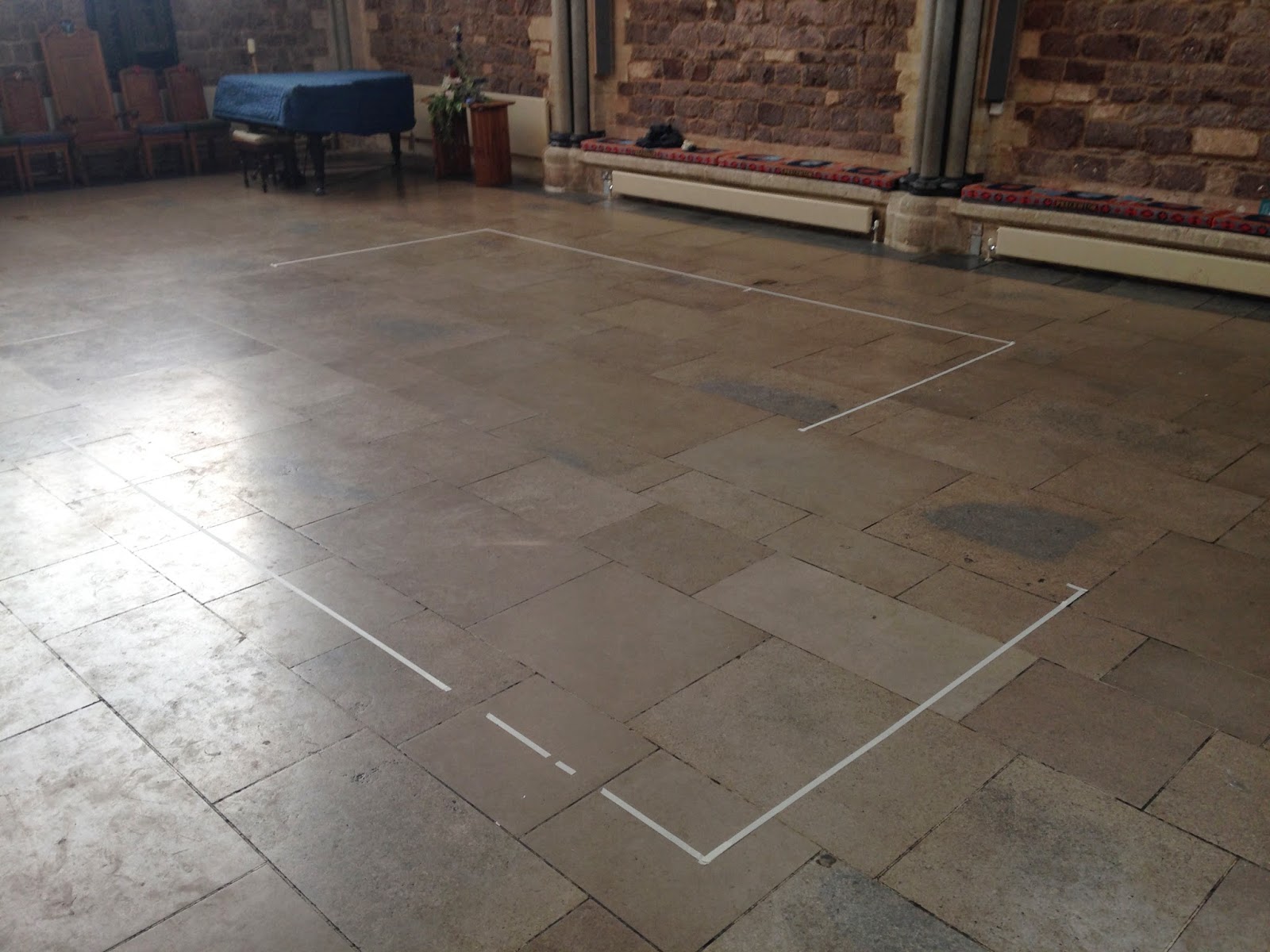 An early visit on the Monday morning with ample supplies of masking tape and measuring tape confirmed that all was well and that the proposed arrangement could be accommodated. Suitably reassured, I headed for the hills - Dartmoor to be more precise - via the Devon Guild of Craftsmen at Bovey Tracey. Having been through - in my humble opinion - a bit of a dodgy patch, it seems back on course, with a modest but pleasing range of art and craft. It also offers in its cafe one of the best ploughman's lunches to be found in this part of the world.

My further progress was slightly delayed by being hijacked to participate in an Arts Council study of who visited and why we chose to so do. Having declared a slight interest, insofar as we show and sell work by many of their members, this was pleasingly proved to my interviewer by looking up to see my good friend Richard Godfrey, delivering 3 of his new pieces. With hindsight our greetings may have seemed excessive, but I was genuinely delighted to see him - and it was his birthday! Suitably fed and uplifted I headed for Haytor. Dartmoor can on occasion be a truly terrible place but very hard to believe that on such a wonderful afternoon. 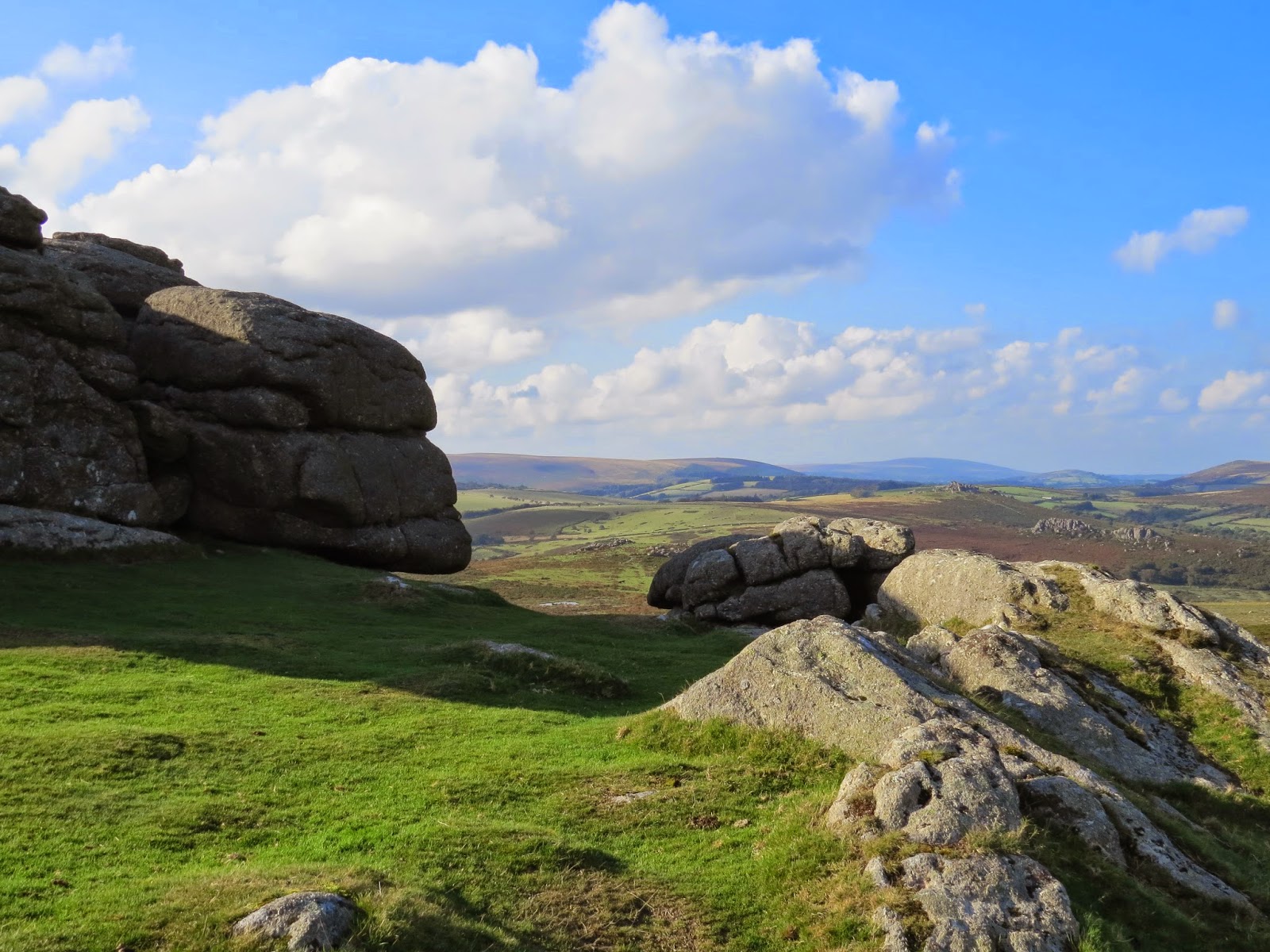 Tuesday found me back in the Chapter House, awaiting the delivery and installation of the display screens. A brief period of tension contemplating how to mount an exhibition without said screens was quickly soothed by their arrival in the hands of two vast and peaceful chaps who seemed surprised that I not only knew where I wanted them to go but had marked it out for them.  All was completed promptly and precisely, leaving me wondering why I could ever have thought otherwise. 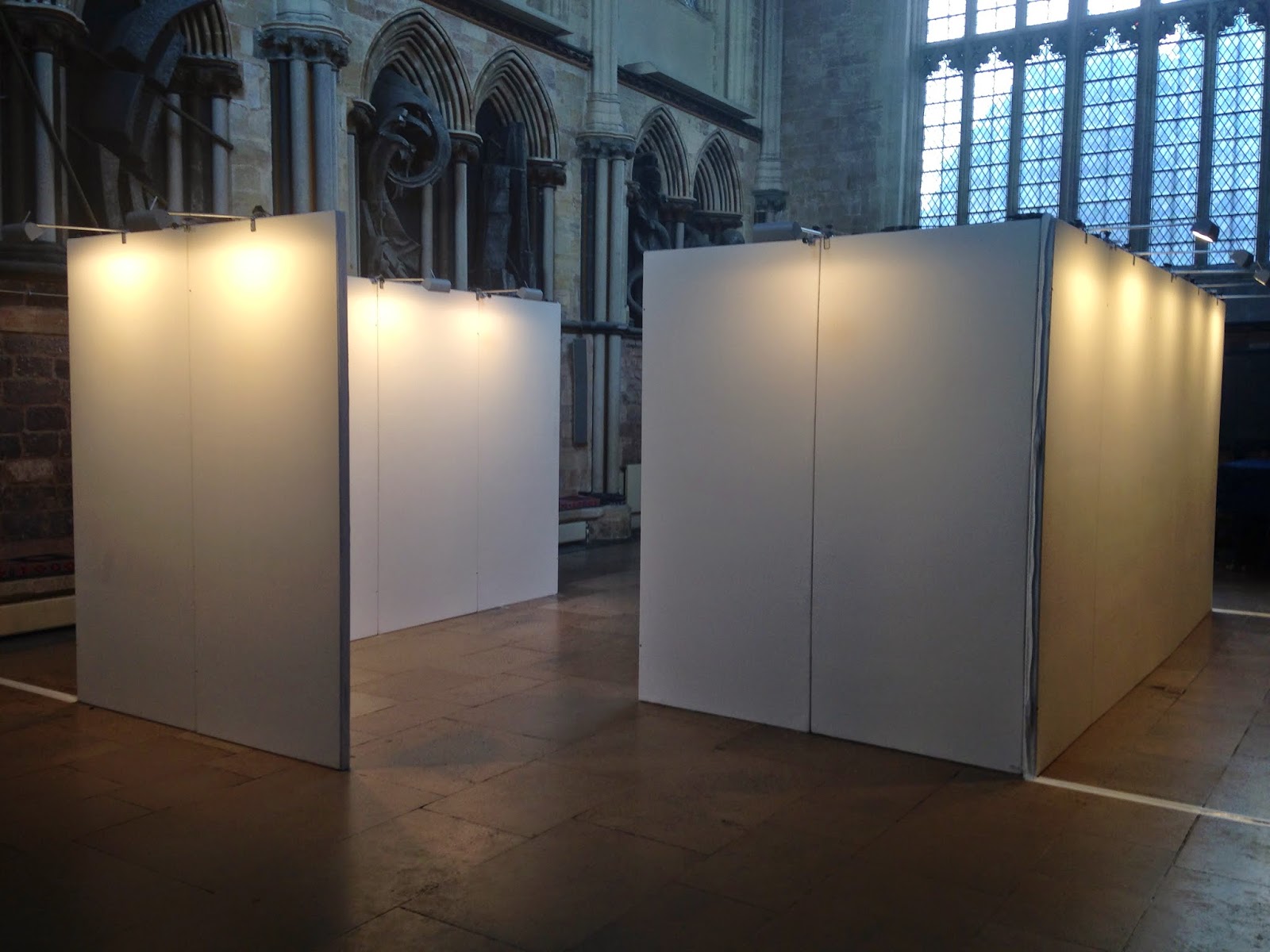 Ably assisted by a splendid fellow who in a previous world had kept a watchful eye on the Royals but now was surprisingly known as the Floor Manager of the Cathedral, Gerard's paintings made their final move across the Green to the Chapter House. Hanging (mounting to be more accurate) with the artist's assistance was completed free of any alarms or excursions - to the extent that the exhibition was ready for visitors by close of play. To mark this momentous point it seemed only right and proper to adjourn to a local hostelry, before entertaining our host to dinner in the Conservatory, one of Exeter's hidden dining delights.
A well attended opening after Evensong on the Thursday, saw visitors not only from the local area but also from Plymouth, Wells, Bristol, Gloucestershire, London and - to our surprise - even some who had travelled from Norfolk for the occasion. In opening the exhibition, the Dean said how delighted the Cathedral was to be hosting the exhibition and thanked Gerard for his paintings celebrating the 900th Anniversary of the present Cathedral. He also noted it was the 12th Anniversary of the Grapevine Gallery which had first opened its doors in Norwich on this day in 2002! 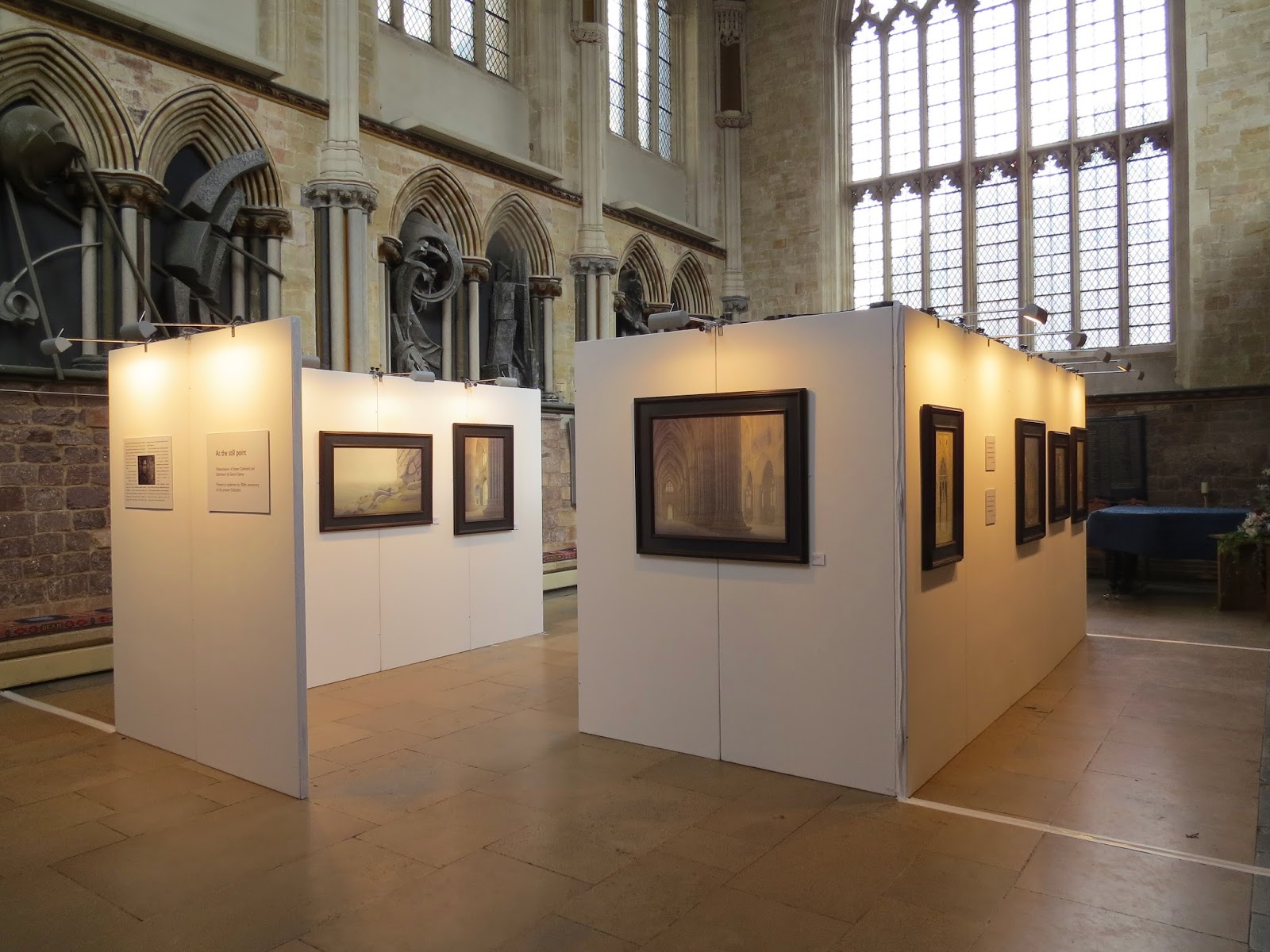 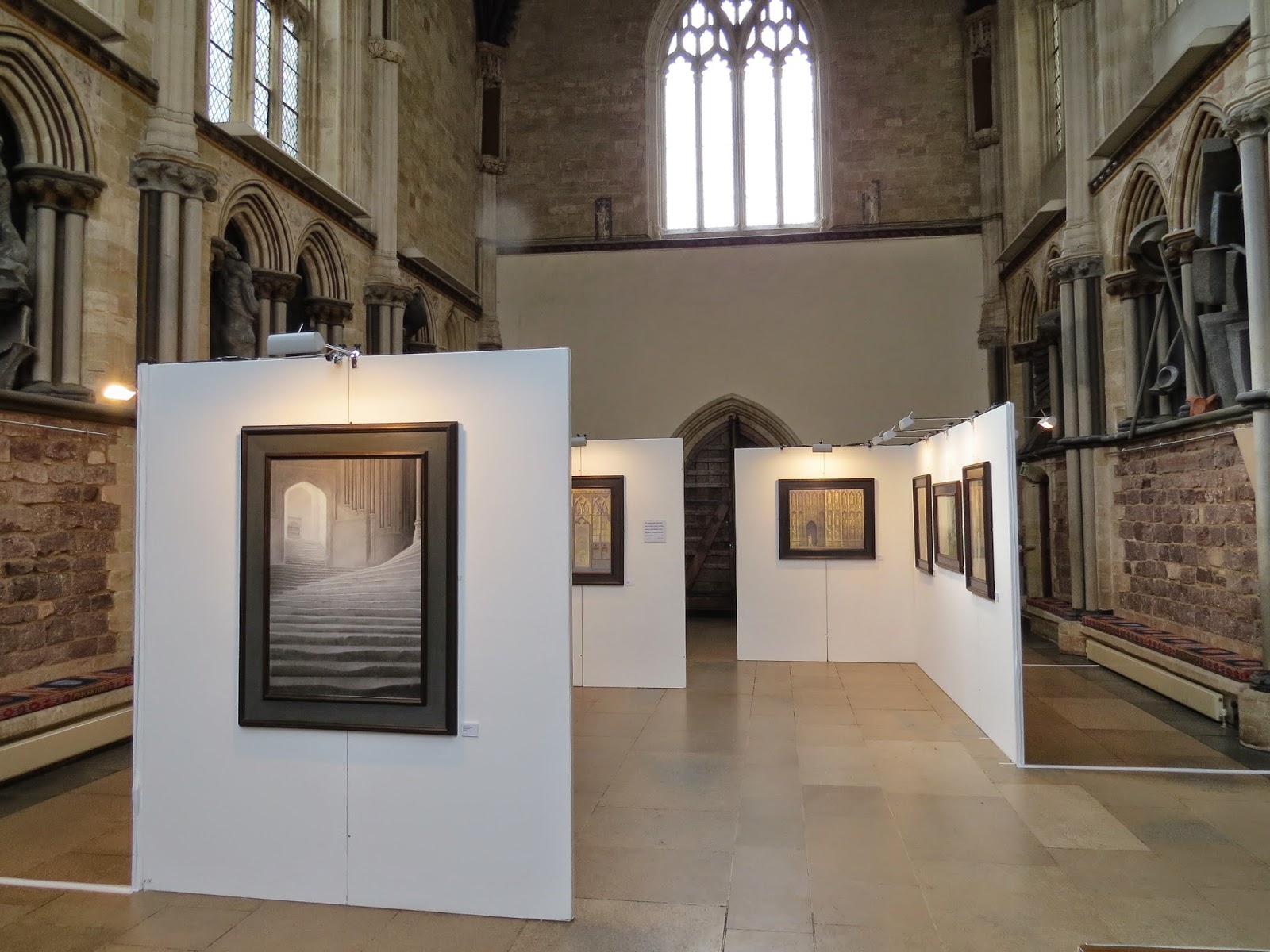 Over the following 7 days, over 1500 people visited the exhibition making this without much doubt the most successful we and Gerard have ever mounted. 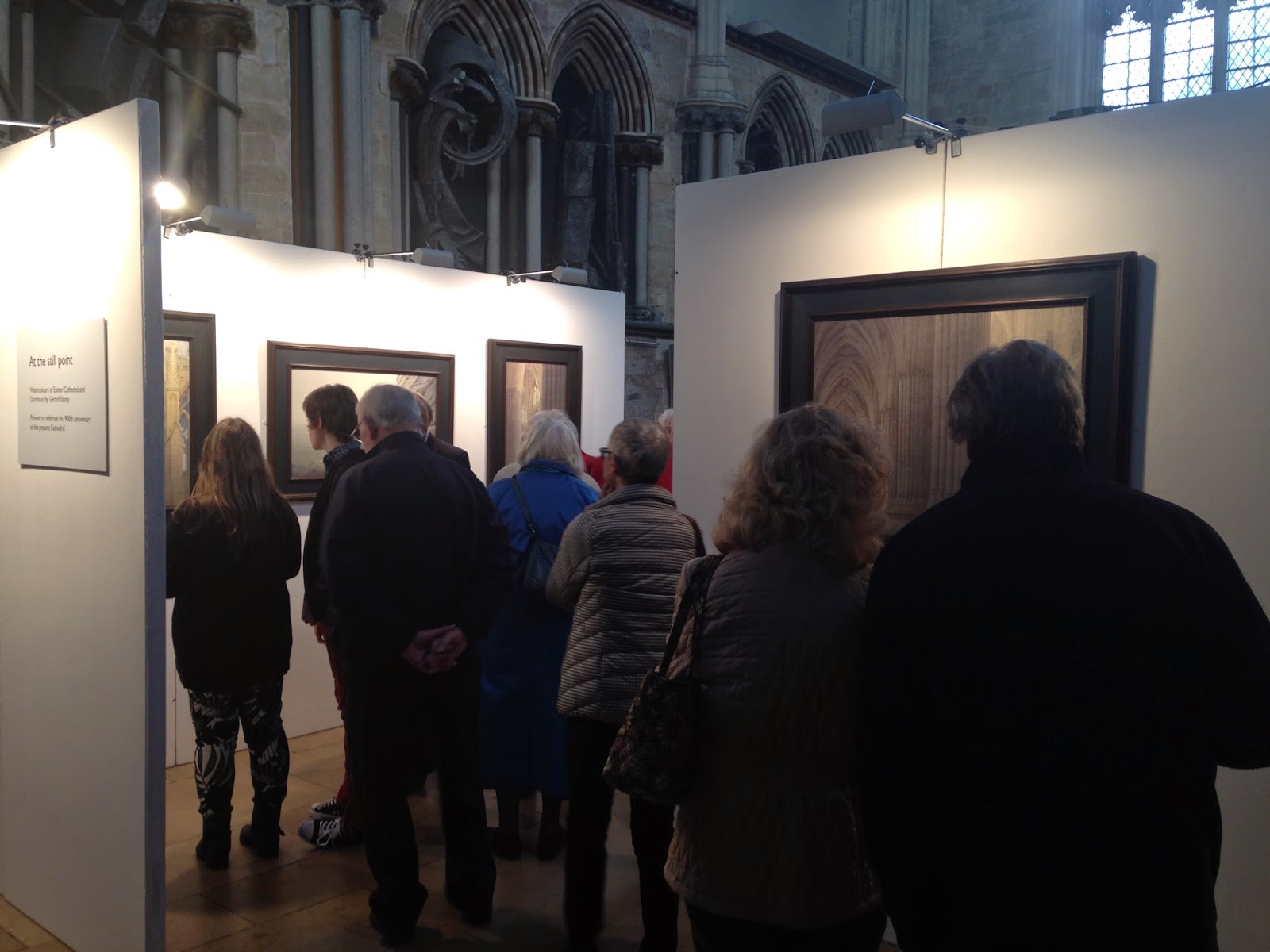 Judging by the reaction it was more than worthwhile... and the word is, Exeter would like some more. A Devon Grapevine?  It has been suggested before and it cropped up again more than once during the week. However, although I love the place and its people, it looks pretty unlikely - although you can never be sure what's round the corner......
Posted by Burnham Grapevine at 18:21 No comments: