Having had a relatively peaceful month weatherwise, March has been making up for it bigtime in the last couple of days. Since the clocks changed and we entered British Summer Time, we seem to have had everything. Warm, cold, rain, sleet, hail, wind - and in all directions. Vertical - up and down - and horizontal. All that is apart from the wind which seems stuck blowing in from the north-west.

With little more than 6 hours of the month left and the wind finally appearing to ease, this bit of Norfolk collected the whole lot in 10 minutes. It did however leave quite a good rainbow in its wake. 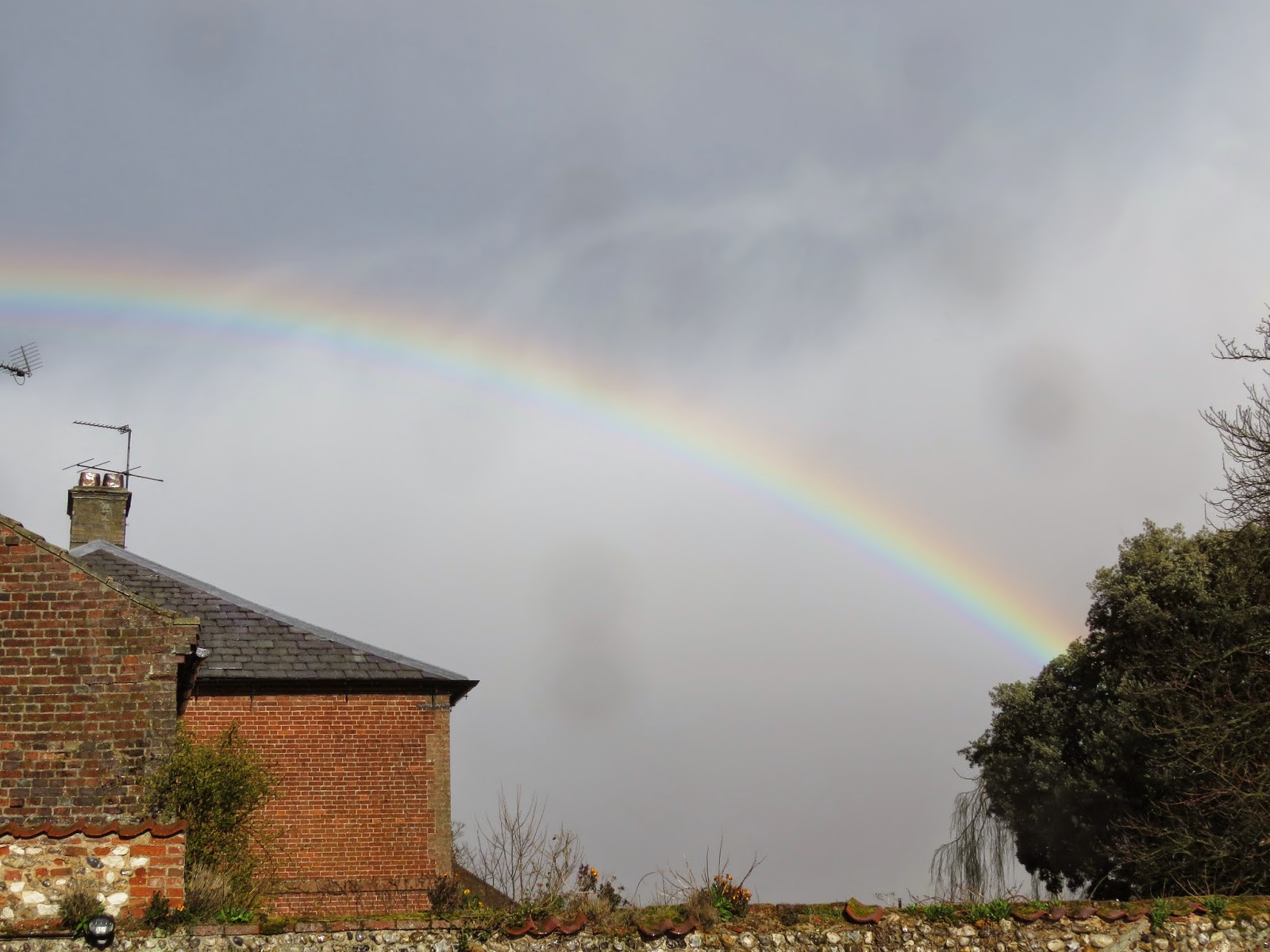 So what next? As I have noted here previously, Easter in Norfolk has a habit of bringing more weather than Christmas, so it seems reasonable to think there might be a bit more to come. "Ne'er cast a clout til May be out", as they say.
Posted by Burnham Grapevine at 21:03 No comments:

Not in your backyard

Most planning applications attract objections regardless of the quality of design or the merit of the proposed use. My recollection is that an application has to be publicised on site and that those affected are given the opportunity to have their views considered. Consequently within communities, be they rural or urban, it is unlikely that anything proceeds without this consideration. At rural locations outside communities it seems things can turn out rather differently.

Within the last few days a proposal to develop a poultry unit just outside Sedgeford has hit the fan in a big way. The term 'poultry unit' is one way to describe it. To most this is an industrial process, an animal factory housing over 300,000 birds in a facility which I understand is large on a national scale. Almost unbelievably it would seem that, despite the application being lodged over two months ago, until the last week most of those who live in the villages most closely related - Sedgeford, Fring and Docking - were not aware of it.

These communities are not immediate neighbours to the proposal but their lives would almost inevitably be affected by lorries servicing the site and potential environmental issues yet it seems that in the absence of public consultation, the majority were unaware. A cursory look on-line at the planning application raises further issues. Sedgeford Parish Council were consulted and somewhat strangely, given the level of adverse reaction that has now surfaced, they would have appear to have supported the application. Not only does this raise the question how representative they are of their constituents but how their consideration was not widely known.

Environmentally, there are significant issues raised by this type and scale of unit. The Environment Agency have already flagged up the site's location in relation to primary aquifers and the need to manage run-off. Slightly more alarmist, at least one of those now alerted to the application has very clearly stated the potential hazards relating to this scale of unit population in terms of use of and transmission of anti-biotic resistant genes, not just from the ventilation of the site but from the lorries moving birds in and out of the site.

This proposal is not in our backyard but it does highlight how easy it is for this type of proposal to proceed outside communities. It is also not alone. Much smaller in scale but realistically described as 'giant' rearing sheds for ducks at Fulmodeston near Fakenham attracted opposition from residents and the three neighbouring Parish Councils, despite which it was approved by the District Council last Friday.

Further afield and utterly different in type of use, a licensing application for wedding parties in a rural location has been made in advance of a planning application for the use, which seems a way in which a potentially disruptive use might make progress without wider consideration - in a way that would be unlikely in an urban context.
Posted by Burnham Grapevine at 17:27 No comments:

On Saturday it was definitely mild - if a little breezy. It felt, as Kenneth Grahame put it, that “Spring was moving in the air above and in the earth below.. " 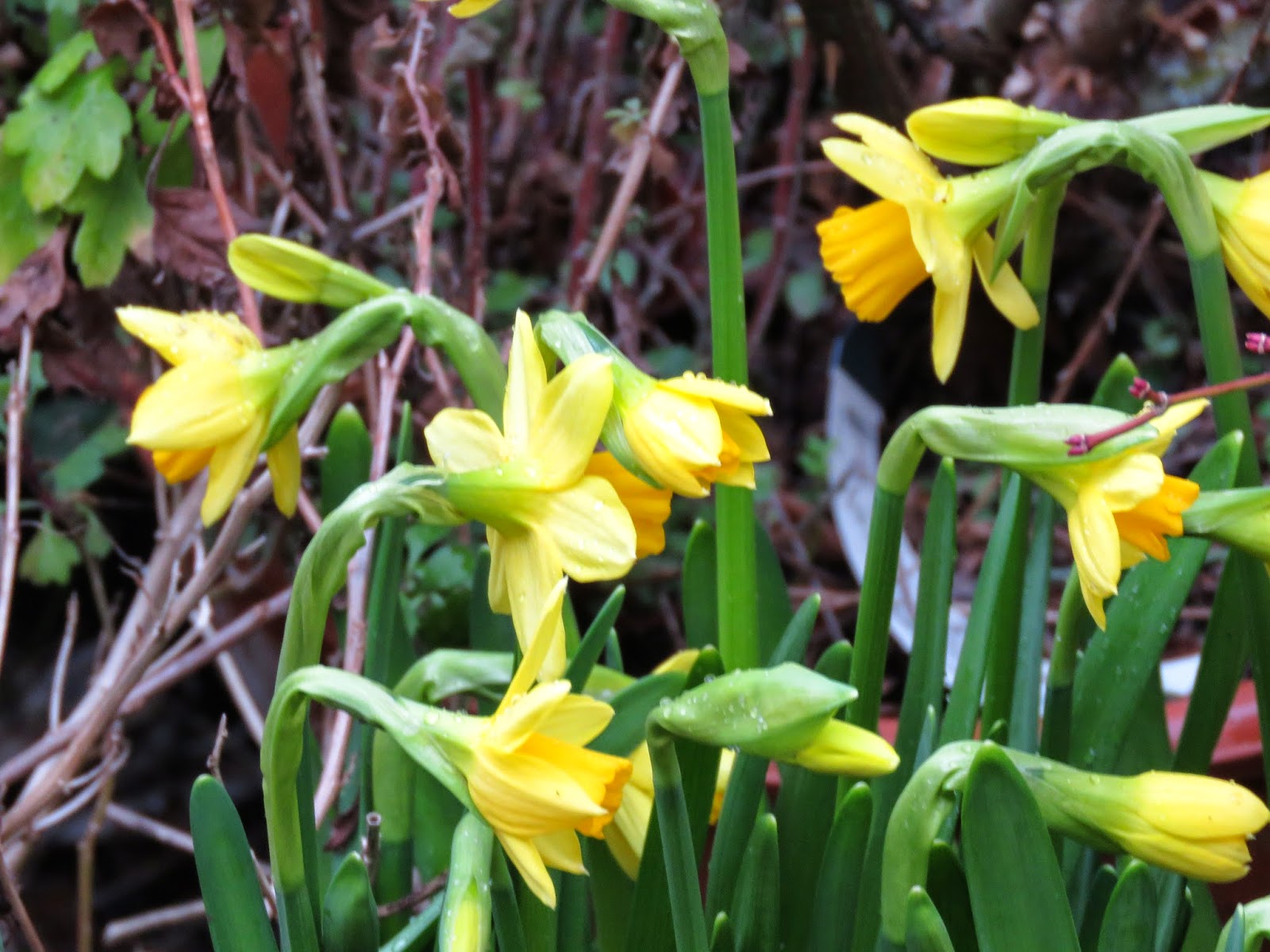 Yesterday, I had cause to go first to Norwich and then onwards via Acle to North Walsham. The sun shone, the sky was blue and Norfolk looked good and felt good. So good that there was a perceptible air of puzzlement if not disappointment amongst those at the plant nursery that not much new growth was on offer. Of course, had it been chilly and damp, this wouldn't have been noticed by anyone, always supposing they had gone to look.

The constant supply of statistics - warmest, sunniest and so on - coupled with the underlying climate change story means that our expectations outpace reality. Yes, the weekend was mild and yes, the last couple of months have seen sunny days, but it is still early March and despite the statistics, February was not unusually mild. Plant growth is accordingly more or less where it normally is in this part of the world. In fact looking back at photographs from last year everything is slightly later this year.

Just to prove the point, today after an early frost we are back with grey skies, a chilly breeze and a little dampness..... but there is no denying Spring is indeed on the move again, and our first featured exhibition of the season is just three weeks away.
Posted by Burnham Grapevine at 16:51 No comments: