Some years ago - certainly before we opened in Burnham - I remember having a phone call from another gallery along the coast just checking that no calamity had overtaken the wider world, they having not seen any visitors over the previous few days.  All was well, but it served to highlight the unpredictability of these things, particularly at this time of year.

November this year has for us been much busier than last. Some of this can be attributed to Norfolk having thus far escaped some of the more extreme weather of the last couple of weeks (I'm sure our turn will come) but it has been Gerard Stamp's exhibition which has attracted so many. Despite the often off-putting conditions for those travelling far, we have seen visitors from across the country and the comments in the visitor's book suggest they have been more than pleased with what they have seen.

Autumn is fairly clearly now giving way to winter here.  The brief burst of autumn colour was somewhat brusquely blown away early on Sunday morning and is now just a memory. 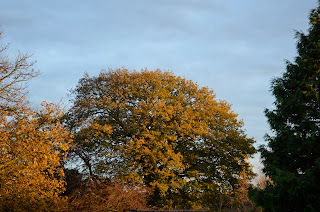 Just to confirm things, Burnham's Christmas lights were switched on last weekend although, as ever, the as yet unlit tree at this end of the village appeared after the event. At this point, I should confess I have yet to put our own lights up yet. Advent seems early enough - although not very commercially aware.  At least one other local business had lights and a tree up before half-term. It would be interesting to know if it really makes any difference; I remain to be convinced.
Posted by Burnham Grapevine at 15:37 No comments:

Thoroughly enjoyed being buzzy on the South Bank - but it's quite good to be back on home turf! The reaction to the exhibition was great and particularly pleasing because we were talking to new customers who - without exception - were stunned by Gerard Stamp's extraordinary paintings.

Naturally we were delighted to hear that the exhibition had received such complimentary coverage in the EDP and it has come as no surprise to have so many visitors here this week.  The exhibition looks very different here compared to the big spaces of the London show, and even if you saw it there I definitely think its worth coming to see it in Burnham.  Both here and in London a number of works have attracted particular comment, the current favourite seems to be the view of Ely across the fields. Purely personally I think it looks even better here than in London. 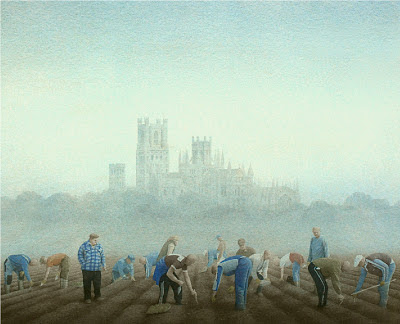 There has been much discussion as to what is being planted. The early favourite, potatoes, were first overtaken by carrots but these have now been supplanted by celery! Much smaller and slightly closer in geographical terms, a view from Wiveton Church looking across to Cley, and not shown in London, is attracting a lot of attention. 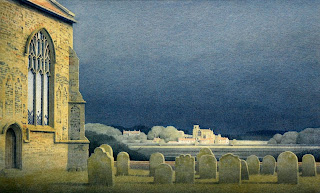 Posted by Burnham Grapevine at 16:50 No comments:

The view from the South Bank

It is a little while since we last transplanted the Grapevine to London, but the last week has found us once again plying our trade at the Menier Gallery in Southwark, just behind Tate Modern.  Not actually sure how many years ago it was, but what a transformation.  The whole area has a real buzz - not just around Borough Market.  And now there's The Shard... which we thought we hated - but now we don't.  Far less dominant than some of the comment and images suggest, it's actually rather appealing.

Unsurprisingly, the exhibition - Gerard Stamp's latest collection of watercolours - looks (immodestly) excellent and has attracted a lot of attention and just like the area, the opening earlier in the week had a real buzz about it. Only in London for the week it seems strange that apparently so soon after opening we move it back to Norfolk at the weekend.  This poses a number of challenges in itself. Packing and loading in London is rather more challenging than Norfolk and then there's the question of hanging in a smaller gallery, albeit on our own patch.  As ever, I guess we'll get there.

If you don't manage to come and see it here in London, we should be ready for you in Burnham on Tuesday.  As always with Gerard's work, this latest collection seems to be his best. Which of course is how it should be!
Posted by Burnham Grapevine at 13:09 No comments: