The first time I engaged in village matters I was told by one who was older and wiser - and who was born here - that two topics could be relied on to spark conversation if not controversy, namely car-parking and the Christmas Lights.

As is the way with these things I soon found myself involved. On the first occasion, a seemingly endless discussion as to the cost and funding of the Christmas Tree prompted memories of a Vicar of Dibley episode where a similar meeting about the Dibley Fete lead the late lamented Roger Lloyd-Pack's character, Owen, to offer to give them the required money just to get the whole thing over with.

With a certain inevitably I shortly found myself in charge of the switch-on - the second biggest event in the annual life of the village - in the year that we ended up with a substantial number of female TV people from the soaps and game-shows. We also ended with a frightening number of visitors - I think the Police estimated it at more than 4,000 - and very few volunteers helping on the day.  Suffice to say discretion or cowardice got the better of me and I fled before the next event came round.

This year, the Gods decided to punish us and despite months of hard work and careful planning, the event fell foul of the worst weather seen for some time. Gusting winds, freezing rain and sleet and a forecast of more to come made the decision to cancel something of a formality in these days of Health & Safety and risk avoidance. Burnham was not alone in this with Fakenham also deciding not to proceed with their own event.

Self-evidently,  even in the new world of social media, people cannot be prevented from coming and indeed we wouldn't want to, but the planned visiting stalls and performances didn't happen. The lights did indeed go on at the appointed hour and despite the sleet were - to my ears at least - very much appreciated by the families who did brave the elements. 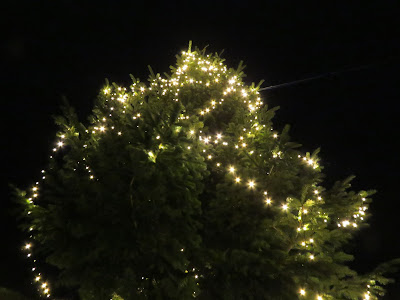 I am absolutely sure that just as in the midst of the chaos 6 years ago, those precious few who had put so much effort into planning, funding and generally organising the event would, on Saturday morning – just like Lloyd Pack's character, have given money for the whole thing to just go away. I am equally sure they haven't been inundated with thanks and yet if it didn't happen the village would miss it and the spirit of the place impoverished. As a local parent said, "Isn't it great that it still happens, its a family thing. I know the weather is c...  but it's not just this evening, it's Christmas"
Posted by Burnham Grapevine at 09:49 No comments: