Who know's where the time goes?

Not just the timeless words and music of Sandy Denny but an all too familar feeling. Can it really be over 2 months since my last scribblings here? Well that remarkable late burst of summer and an extended autumn seems finally to have given in to slightly more seasonal weather with the temperature easing down to what is laughingly referred to as normal.  Just remember, twelve months ago we had snow and very low temperatures but, despite the sensationalist predictions for a repeat performance - it hasn't got here yet.

The lights have been on around the Green in Burnham Market for two weeks - it really did feel a bit too early - but for whatever reason, they're not on at this end of the village. We do, however, have a nice green tree.

Can't really claim any credit for this, but just by chance, we managed to get a brief fix of early seasonal cheer with a visit to Copenhagen. Bit chilly, a Christmas Market and some fantastic food and a little drink. A very civilised place.  I shall be back for more.

Slightly closer to home, but still to the east, I spent a very enjoyable evening with Gerard and Jacqui Stamp at the 'soft' opening of The Gunton Arms.  Restored and reinvented from its former slightly off-target existence as a country house hotel, it looks set to transform various lives at Gunton. The man behind it, Ivor Braka has already restored much of the Park to its former glories and having it's own pub - for that's what is - is just fantastic.  Good to see so many friends there for its first night including Diana Parkin, Helen David and of course the man who started the whole restoration at Gunton - Kit Martin.  More surprisingly there were others like me who have gone to the dark side (West Norfolk) but thought it worth the journey. Which, of course, it was. The beer's great - Yetmans of course, and the food was good. Not surprising given the chef's pedigree but it was first night.  Oh and there's a piano which was suitably christened by Gerard, who despite these distractions continues to paint.  Amongst recent works, two in particular stand out. 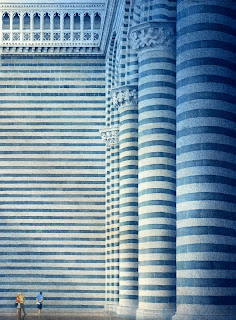 The first of these, of the Duomo di Orvieto in Umbria is by anyone's reckoning a staggering achievement.  From those who know his work, to visitors who know nothing about what has gone before the reaction has been overwhelming. Favourable, that is.  Which is good, because we are planning a major exhibition for Autumn 2012 which will include more paintings from Umbria.  Our current thoughts are to open the exhibition in London and then for it move to Norfolk.. and possibly even further afield.

There may be other delights in store as well.... Watch this space as they say.

The second is equally remarkable - but this time for it's simplicity. Much, much closer to home Saltmarsh Creek is a return to a the Norfolk coast.  Andrew Ballantyne, author and Professor of Architecture at University of Newcastle summed it up. There is a touch of melancholy - but it is the serenity of the space and the light that holds your attention.  My thoughts entirely. It's a big picture but it's going to look stunning on someone's wall - and in these strange times, it reminds you that we are so lucky to have these spaces just down the road. 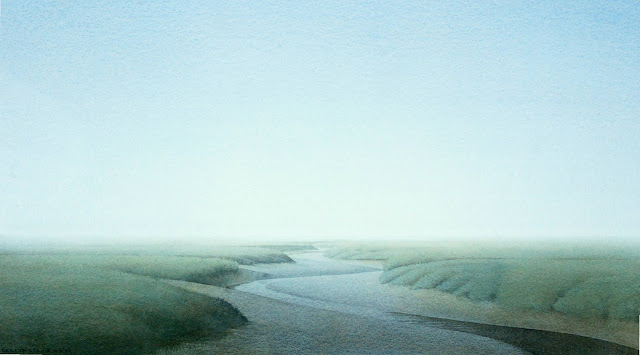 Posted by Burnham Grapevine at 17:31 No comments: