Bit of a Max Angus fest, but no apologies for that as she has just brought me a new print which I think is one of her best. 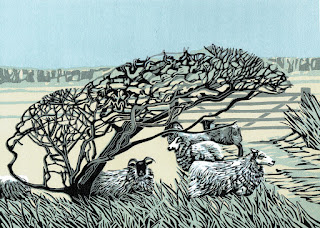 This little group is to be found between Thornham and Old Hunstanton or so I am told.  Time for a bit more investigating I think.

Having to go the far east (Holt) twice this week before opening, it's striking just how good North Norfolk is looking despite the lack of warmth.  The stretch between here and Wiveton is particularly enticing and I've finally now visited The Anchor at Morston in its new guise.  Many years ago, we used to pretend to sail an Oyster out of Morston Creek and despite The Anchor being the closest we hardly ever used it. Now run by two talented chaps, Harry & Rowan, I can at least vouch for the quality of the food coming out of the kitchen.  The belly pork was delicious... and the Norfolk Rarebit.... and the puddings...  Also very happy to report that even though the boss wasn't present, the service was good. As they say - 'you've all done very well!'

Having spent a little time in Holt including trying to get a local phone number via Google on my phone and eventually leaving a messsage for the lucky recipient - Sarah of Brays Pork Pie fame (food again), I crossed the road and went in Starlings only to find myself standing next to her.  Sadly she had no pies about her person, but she did point me in the direction of a good article about North Norfolk in Food & Travel magazine.

As far as Holt goes, I always think it looks great but the people don't seem very happy. It could be me.. or maybe it's the stress that goes with controlled parking?
Posted by Burnham Grapevine at 11:02 No comments:

It's been a long time

Just over the 3 months since the last entry, in which time we've had summer, the wettest drought anyone can remember and the last week has been wet, windy and cold even for an English autumn!  Strangely all this doesn't seem to have adversely affected the gallery.  Visitor numbers are up on last year and whilst trading continues to have no discernible pattern, sales are encouraging.

Amongst this seemingly random scenario, a number of our artists, including Max Angus, Gerard Stamp and Niki Bowers attract consistent interest.  Two of Max's recent linocuts have been particularly appreciated, Redwings - seen at Binham and Fieldfares - captured (artistically) closer to home here in Burnham. 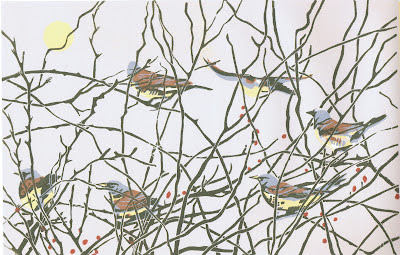 Last weekend, just before the Jubilee celebrations, we opened our first solo exhibition for a while, featuring the characterful work of Brian Hinton.  With a small collection of drawings and studies going back over some 20 years together with 5 new paintings - all featuring jazz musicians and their followers - "All that Jazz" has been very much appreciated. 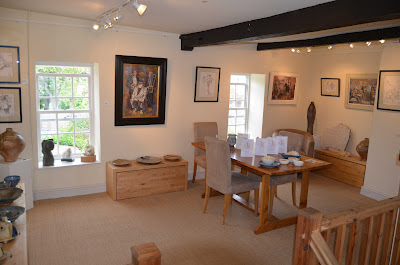 Posted by Burnham Grapevine at 12:12 No comments: