Back to the sea

I walked out to the sea last evening. There is nothing particularly unusual about that other than remarkably it seems to have been 3 weeks since my last walk in that direction.  In so many ways it stays the same and yet in others it has changed significantly.

Having had a sequence of days of brilliant sunshine and wonderful light, last evening was different. Chilly and cloudy, but clouds with mobility and ragged edges. The bittern is still there, booming as his, or her, want and now joined by a cuckoo over towards Holkham. Birds aplenty but now slightly less activity which always surprises, but birds do what they do each year much earlier than I expect.

The Alexanders along the bank are growing up on either side, changing the character of the path. No longer on the top but nestling down into a burgeoning froth of green and yellow. As yet it isn't intrusive but with the next burst of warmth they'll be up to waist and then shoulder height, and soon past their peak reminding us just how fast the season moves on.

The closer to the sea you get the less the seasonal changes are apparent, the dunes always seem much as they always are. The sand moves and drifts in the wind but the plant growth hugs the ground out here. The beach itself looks unchanged. It could be October, January or May. And yet to those who know it has changed. 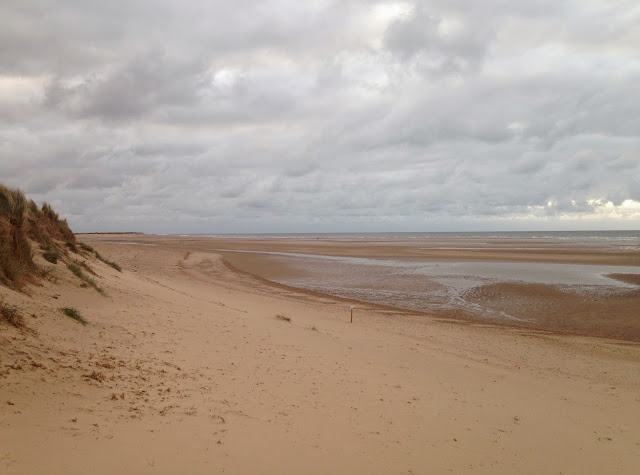 Looking west towards the Island, the channel has moved. Having been stable for a while it has now shifted eastwards back towards Wells. Subtle in terms of the scale of the landscape but to those who enter and leave the creek more significant than all the visual seasonal changes around us.
Posted by Burnham Grapevine at 12:59 No comments: