The quiet wrecking of Norfolk

Even if you're a non-believer in terms of global warming - and there is plenty of evidence out there that does not align with the main-stream view - there is good reason to be concerned about future energy supplies.  Whatever you think, the sad fact is that much of the landscape of Britain is being changed in the name of responding to this.

Much of the high and formerly empty spaces in Wales, the West Country and the Northern Hills have fallen to our new idol - wind power. Sadly Norfolk seems to be heading the same way. Recent planning decisions suggest that even with growing misgivings about finance and carbon footprint, the quality of the landscape and the wishes of local communities still do not figure much at the end of the day.

Having lost the battle at Stanhoe, a large area of open 'high Norfolk' is soon to change with the construction of six 100m plus turbines. Less obviously intrusive but significant in its own way, Planning notices have just been posted for a solar farm at Bunkers Hill on the 'Dry Road' from Fakenham to Wells. It could be argued that this site impacts on few neighbours, but it does mean change of use from agricultural to industrial with attendant security fencing, buildings and all the necessary infrastructure - and it is another loss of the few big empty spaces in Norfolk.

Tellingly, the first results of an internet search for solar farms are all adverts for operators seeking sites. "Earn top arable yields from pasture. We won't waste your time", and "Farmer? We farm too - call us." and "Premium rental for land suitable for solar farms in England & Wales"  The message is pretty clear, I think. Couple this with the NFU conference trumpeting how farmers can save us all from impending energy armageddon and its a pretty gloomy outlook for beautiful empty Norfolk.  Or anywhere where money might be made.
Posted by Burnham Grapevine at 18:34 No comments:

It could be spring, but we all know it isn't that simple. Today the sun's shining, the wind's dropped and we're feeling fine. Just 3 days ago it was rather different and in another 3 days it probably will be again. However, talking to visitors it doesn't actually make that difference to most, and indeed there is a sizeable contingent who come to enjoy whatever North Norfolk chooses to throw at them.  This week it seems the dominant experience was not wind or sleet or even sun - but mud. 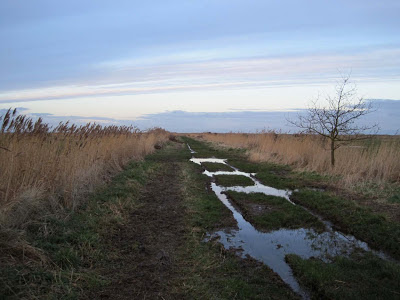 It isn't hard to understand why so many of us love these marginal areas.  Just as you don't need to be particularly religious to appreciate and enjoy the beauty of ancient churches, you don't need to have a boat to enjoy the North Norfolk creeks, and in both cases you would be in the majority. What is less easy to appreciate is that there is a substantial cost attached to managing places like Overy Staithe.  The fact that Cathedrals fall down if they are not cared for at considerable cost is more readily appreciated than the fact that these creeks would silt up and disappear if they were not cared for - also at considerable cost. 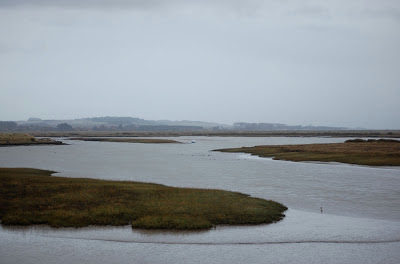 Traditionally, the groynes - these are the banks of stone you see in the creek at Overy - were maintained as a matter of tradition and routine in order to direct the currents and maximise the scouring effect of the  tide. With the decline of working boats this traditional pattern of care and maintenance passed into history and the channels become increasingly shallow.  Ultimately, without maintenance, the groynes would pass into history and so would any navigable channel. Life and landscape would change - not as a result of activity but of inactivity, and there would be more and more mud and less water. Whatever we think about the current state of play it is hard to find anything particularly good about such a change. The question is how even maintaining the status quo is to be funded.
Posted by Burnham Grapevine at 17:26 No comments: