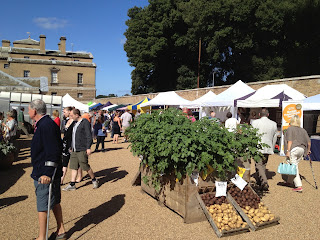 Posted by Burnham Grapevine at 14:22 No comments:

Even though August still has nearly a week to run, change is in the air. Even between yesterday - the last Bank Holiday of the season - and today, the change is tangible. You can almost hear the North Norfolk coast relaxing.

From an unpropitious start, the last 7 to 8 weeks have seemed like one of the best summers people can remember. Maybe it was because of the long cold spring that expectations were lowered. Indeed it changed almost from the moment that the official forecasts pronounced that it was not going to get any better and that we needed to get used to it, with summers likely to be disappointing for the next few years.

In reality it probably hasn't been that remarkable but the surprise of reasonably consistent 'summer' weather has also engendered a positive feeling about just how good life can be.  Annual events which over the last few seasons have started to seem a little routine took on a new shine. A bit more fizz and sparkle. The Burnham Craft Fair - a key event right at heart of the North Norfolk summer - not only felt fantastic but did great business and seemed to avoid some of the stresses and tensions associated with the busiest day of the year.  Watersports Day at Overy which in recent years was increasingly under threat from insurers and the Health & Safety ethos was back in its stride, blessed with just the right weather and fantastic support from local people. Reassuringly good.

On the cultural front the North Norfolk Music Festival is in the middle of an amazing programme with events sold out even when they're competing with fine summer's evenings. On one of the very few damp days, Jools Holland worked his magic at Holkham last Saturday and there is still the Food Fair to come.

And close to home, footfall and sales in the gallery are up. And that was before the opening of Gerard Stamp's latest exhibition with us.  Given the last few weeks I suppose it is not really a surprise that his unique evocations of the marshes, creeks and coast around Overy have been so well received and sold so quickly.  It is a modest exhibition in terms of number of works, but definitely worth seeing. 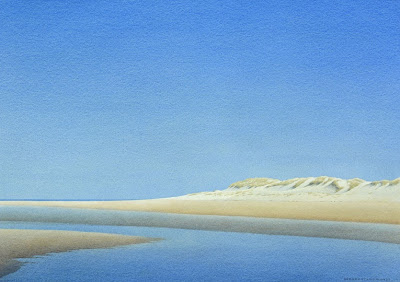 As somebody remarked at the weekend it feels like time for a rest.  In fact it's not really a rest but a change of pace and style that kicks in now.  More space, more serenity and eventually fewer events and activities. But this is probably how most of us who live and work here like it. Relaxed.
Posted by Burnham Grapevine at 17:30 No comments: