The proof of the pudding

Following up on my last post, I am pleased to report that the lights did indeed go on here in Burnham a couple of weeks ago. Like most of the businesses, we are aware of what's going on during the day but only manage to go and have a look towards the end, having discharged our basic function - to trade.

Based on what I heard from customers during the day, it all seemed to go down rather well, with lots to eat and drink and a mix of music on stage and strolling entertainers loose and wandering around the village. The days of the celebrity switch-on are seemingly gone for good with the re-establishment of Father Christmas at the centre of things seeming to satisfy most people's Christmas wishes. 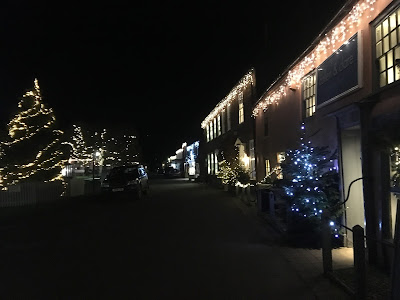 As for the lights themselves, I remember when tungsten started to give way to LED there was a noticeable backlash and a feeling that these new-fangled things were cold and clinical and not very Christmassy. They may have been, but the world and technology has moved on and Burnham has moved with it. The LED's no longer look cold to me and crucially (by and large) they work when asked to. Just as celebrity has been consigned to history so it seems has the need to check and replace bulbs. Another Christmas Tradition that might just not be missed.
Posted by Burnham Grapevine at 11:54 No comments:

A couple of years ago I wrote about the hazards and pitfalls of having Christmas Light switch-on events.  Well it's that time again, and all across North Norfolk, lights are being installed, checked and day by day, switched on - even though Christmas isn't quite just round the corner. 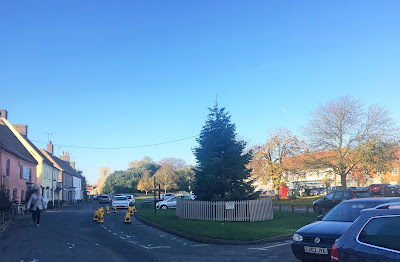 When its cold, crisp and bright as it is today, it doesn't seem that strange, but on mild days with leaves still on the trees it does seem just a little early. For most of our neighbours, thinking particularly of Wells and Holt, the organisation and installation is, I think, if not in the hands of the local Town Council very much supported by them. Here things are a bit different; Burnham is smaller than you might imagine - we are not a town but just a slightly larger than average village. We have a Parish Council but the traditional Christmas Lights have always been a matter for the Traders Association, indeed I believe this is where the origins of that body can be found.

Each year in the time we have been here there has been a question of costs and management. There are a surprising number of businesses here but as time has gone past, an increasing number are staffed by those who live elsewhere and the original direct connections and community links have diminished. Fortunately largely through the efforts of a very few over the last couple of the years, some of the installation costs are now more manageable, but as somebody noted this week "they don't switch themselves on" and the Christmas trees themselves need to be funded, purchased and installed.

The Parish Council are of course involved but the fact remains that without the time and effort expended by one or two individuals sorting every thing out, Burnham's lights simply wouldn't happen and another little bit of community life would fade away.
Posted by Burnham Grapevine at 14:09 No comments:

In a previous world I was an urban designer. I know and I apologise, although actually some of what we worked on was good. Some of it was however too radical for conservative clients, both public and private.

Nearly forty years later, the world has now moved on. The idea of retail parks in edge of or out of town locations - closely followed by new business centres alongside - and then the explosion in online shopping, means town centre shopping is now more or less irrelevant. Niche destinations remain viable either because the destination is attractive in itself or because they offer small specialist and unique services.

The small town 'shopping centre' built in the 60's and 70's has by and large had its day. Nobody wants them and fewer and fewer go there. All across the country there are towns and cities desperately trying to reverse the tide.  Funding and re-branding ain't going to fix this. As one of my colleagues memorably advised one of the regeneration agencies we were working for way back then, "it's like a dog chasing a motorcycle - it wouldn't know what to do with it if it caught it". History suggests there is some truth in this - sadly the country is littered with regeneration schemes that didn't actually fail but just spluttered and subsided back from whence they came.

The answer is to change the way we see these unloved towns. Nobody wants to shop there so we need to reverse things - live there. Convert the unloved shops to residential and community use, maybe put care facilities in the centre so those in need don't depend so much on others to take them there. It's worth remembering this is not rocket science; historically it was done the other way round with housing being displaced for retail.

Towns are increasingly like Polo mints - with a hole in the middle. Instead of building further and further out making a bigger and bigger hole we need to abandon our perception of 'town centres'. In many cases they already simply don't exist. We need human scale development to live in at the centre with the other stuff round the edge. The latter part has already happened but so far we've failed to act on the consequences of this.
Posted by Burnham Grapevine at 11:41 No comments: