Just a couple of months back I wrote, "Strange old summer we seem to be having.  The wall to wall sun of April is but a distant memory and the routine seems to be days of quiet where nothing much happens weatherwise. More like early October than late July" Now it's nearly October and like the rest of the country - with apologies to our followers in the north and west - it's more like late July.  In fact, better than that. It's simply glorious and looks set for a few more days at least. 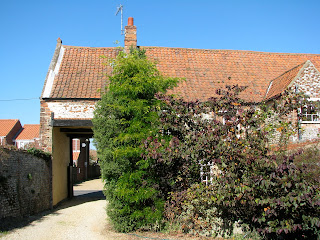 Today being Michaelmas Day (by the New Calendar), it's traditionally the last day of harvest and, most importantly in our neck of the woods, it's Nelson's birthday. 253 today to be precise. Hard to imagine, but they must have had days like this as well.  It being Thursday it's also Market Day in Fakenham, a much derided and under-valued town. Wandering round the stalls today it's hard to see why it is so un-appreciated. Fantastic fruit, veg, food and plants - and it's got every conceivable piece of ephemera, tat, curiousities - call them what you will.  Most importantly it attracts people. Real people who live here and roundabout.  You could live happily just coming here once a week and very prudently as well.  As a lapsed architect and urban designer, Fakenham on Market Day has got what every urbanist world-wide aspires to - life!  Real people, all shapes and sizes, not just the trendy uber-cool beloved of students and designers, doing real things; buying eggs, dog-biscuits, bulbs electric and bulbs horticultural, cheese, and a few old toys for good measure. You couldn't imagine it could happen but it does, week after week.  I know it's quiet between times, but it's a market town and that's what it does!


It also has possibly the best HSBC branch in the world, but don't tell anyone.


On a similar note, spurred on by the weather no doubt, we also have possibly the Best Post Office in the World at North Creake and the Best Bit of Norfolk Coast in the World at Overy Staithe and to be fair, one of the Best Churches in Norfolk at Norton but as before.... shhhh! 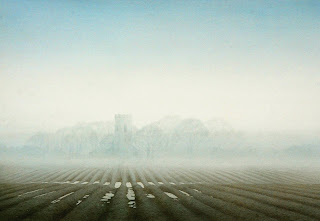 Posted by Burnham Grapevine at 13:14