Excursions to the West Country - one of my first loves - these days usually leave me feeling smug as to the space and freedom we still enjoy up here in the remote fastness of North Norfolk.  On this occasion, maybe not so smug, the unique mix of Olympics followed by the best weather of the summer have left Norfolk (and getting in and out of it) at least as full as Glorious Devon, or so it seems. 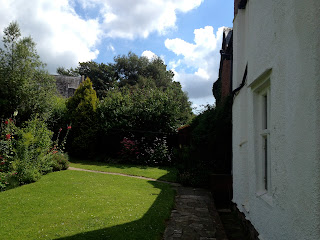 A few days staying right at the heart of Exeter - in the Cathedral Close to be precise - proved there is peace and a timeless sense of place still to be found if you're lucky enough to have the opportunity.  And extraordinary contrasts; mediaeval houses facing the Cathedral Church on one side, whilst to the rear a small Devon garden full of flowers, climbers and shrubs - all running riot in the warmth that has finally followed the rain. 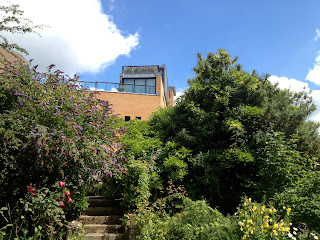 And just beyond, the penthouses and the 21st century take on a mediaeval roofscape of Exeter's new retail quarter.  Strange to say, I think it works.  Just.

And then on to the Isle of Wight and the heady delights of Cowes Week. Not to sail you understand but to enjoy the unique buzz of a small town entirely in the thrall of sailing at the top end. It would be easy to mock and scorn the money involved - the entertainment and sponsorship aspects and so on.  But why?  The heart of it is the sailing; not just showing off the hardware but really getting down to it.  Sailing doesn't get much more competitive than this.  And without it I'm not sure what the Island would do.

Fifty odd years ago - in the far-off days of steam trains - we twice holidayed in the far west of the Island, at Freshwater to be precise, staying in a house owned by a well-known radio actor. Even then the place had a character all of its own.  Nowadays people tend to say going to the Island is like going back to England in the '50s.  Well I'm not so sure;  I think it has changed and I'm not sure I quite get it as they say.  The beaches, the coast, the water and the boats - yes I get that, but it's the rest.  The interior of the island seems a little claustrophobic, bits of Surrey surburbia seem to pop up everywhere and the roads which are I guess appropriate to the actual size of the island are seemingly out of step with the number of vehicles.  Newport, the island's capital seems to be grid-locked much of the day, but just where they are all going or trying to go, isn't that obvious.  And if you look at the constant queues for the numerous ferries it becomes even more puzzling.

But we had a grand time - enjoying the buzz, the boats and the generous hospitality - and will rush back at the next opportunity.  Maybe that's the answer.  Or maybe it's the magic of any ferry sailing out of the sunset.... 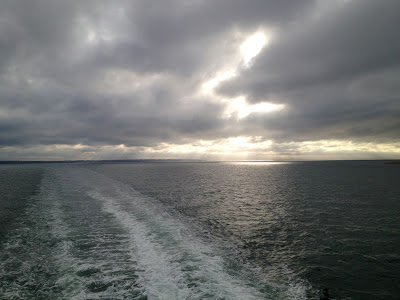 Or maybe it's the extraordinary waterfront at Portsmouth, or..... 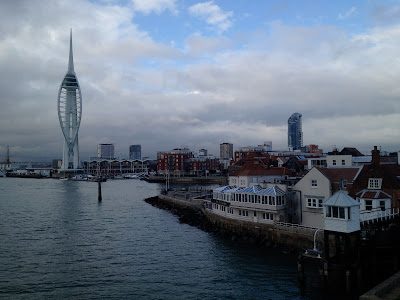 Posted by Burnham Grapevine at 20:36